Of the five Gordon brothers who fought in the First World War, two are remembered on the Sevenoaks War memorial. Donald Jervis Gordon was the first to be killed, dying on the third day of the battle of the Somme in 1916. Donald was a Lieutenant in the Border Regiment.

His younger brother, Bernard Vernon, was killed later that year in December 1916, in a flying accident in Northumberland whilst serving with the Royal Flying Corps.

The remaining brothers who fought were Thomas Milford – a Second Lieutenant in the Royal Engineers, Edward Basil and Cedric Foskett Gordon. During the course of my research for the book, a family friend of Cedric, David Lambourne, contacted me with information about him, including Cedric’s obituary and recently one of Cedric’s nephews, Martin Gordon, wrote to me from Australia, having been pleased to find the photograph of his uncle that David had sent me and which is now displayed on my ancestry page for Sevenoaks as well as in the War Memorial Gallery on this site.

Cedric lived to the ripe old age of  89, dying in Sevenoaks in 1979. Like his brothers Donald and Edward he was educated at Lancing College, were he excelled in sports. In 1910, he was commissioned into the North Staffordshire Regiment. He was sent to France on the outbreak of war and was wounded twice. In 1915 he was awarded the Military Cross for leading an attack on a village. 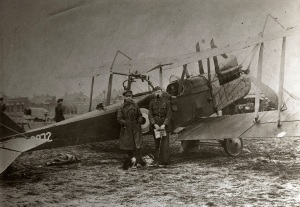 His second injury was the most serious and resulted in his losing a leg. You might be forgiven for thinking that this would be the end of his war service but Cedric joined the Royal Flying Corps and continued his wartime service as an observer and air gunner on the Western Front. He was subsequently awarded the Croix de Guerre in 1917, was mentioned in dispatches four times and awarded the military class of the OBE in 1919.

According to another nephew,  quoted in his obituary, Cedric was shot at during one flight with the bullet shattering his wooden leg. On landing, he was said to have found the stray bullet in his pocket and was confined to bed until the camp carpenter had made him a new leg.

Cedric, on left, having lost his right leg

After the war, and having gained his pilot’s licence despite his wooden leg, Cedric was sent to Russia with British forces to aid the White Russians in the Crimea in their fight against the Bolsheviks. He was awarded the Distinguished Flying Cross and received the Order of St Ann and the Order of St Stanislas from the Russians. After leaving Russia, he flew in Palestine, where during one flight for reconnaissance work, he was forced to land in the desert and was, according to his obituary ‘picked up by a band of friendly Arabs’.

Cedric later worked for British intelligence in mainland China, before returning to England and taking command of the RAF Bloom Centre. During the Second World War, he was eventually put in charge of the South East Air Training Corps and was also a member of the Home Guard.

On his retirement, he returned to Lancing College, where his brother Edward was a Master, to become Bursar. Later in life he became well known in Sevenoaks for his involvement in the local scouting movement.

Cedric’s nephew, Martin Gordon, wrote to me with his memories of his uncle:

He lived in a big house with grounds in Sevenoaks. He had big vegetable gardens, a large pig, called Mr Pig, and even a little wood on a hill. He had a little MG which he used to drive my sister and I into town with – we stood up in the boot. He never married and lived with his sister Kathleen. She affectionately called him “Beast” and he had a similarly uncomplimentary name for her, which I can no longer remember. He was a wonderful man- we lived near London, but we drove over to visit about once a year when I was a child, and it was always one of my favourite days of the year.

To my shame, I never quizzed him about his life. All I can remember is that he was a pilot in World War I and he lost a leg. He still had the trench coat he was wearing when he was wounded, with a hole burned in it – he showed it to me. He said he also fought in Russia after the war for the RAF. One of the things he told me was that when he was in Russia, he was shot down and had to walk through the snow back to base. I have recently been able to check the facts, and this is what actually happened:

On 23 December 1919 the plane he was in was hit and they had to make a forced landing behind enemy lines. He and the pilot burned the plane and set off walking through the winter snow. You can imagine how cold it was, Christmas time in Russia! And they didn’t get back to base until the next day. I can’t imagine how he did that with one leg.

Martin Gordon is investigating his uncle’s service in Russia and I am continuing to research the service of all of the brothers who fought during the war and who gave so much to their country.

Sevenoaks and the Great War

Buy our latest book that tells the story of the men and women of Sevenoaks during the Great War,