The majority of men named on the Sevenoaks war memorial are buried or remembered abroad in the immacualately maintained cemeteries of the Commonwealth War Graves Commission. Some, however, are buried much closer to home, often because they were invalided back to England and were buried locally after dying of their wounds. There are CWGC graves at Greatness Cemetery and in local churches, in and around Sevenoaks where men such as Alfred Hope and Harry McCarthy are buried. Many of these men buried at home were given a funeral with full military honours, which was reported in the Sevenoaks Chronicle.

At St Nicholas, the parish church of Sevenoaks, there are several memorials to some of the Sevenoaks fallen inside the church; others are buried in the churchyard or remembered on family graves despite being buried elsewhere.

Inside the church are memorials to John Sherbrooke Richardson, Geoffrey Harrison, George Henry Heslop and William Guy Cronk. Cronk is also mentioned on the tombstone on his parents grave and was one of the earliest of the Sevenoaks casualties, being killed in 1914. 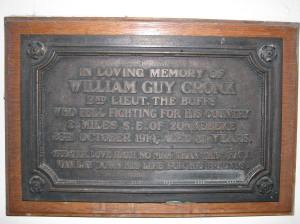 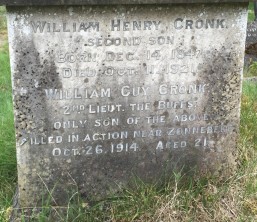 Herbert Sears and his wife, who both died within a week of each other during the influenza pandemic of late 1918, leaving five young children are also buried in the churchyard. Herbert had run the Rectory Farm for the Rev John Rooker and, as a conscientious objector, had served with the Labour Corps. 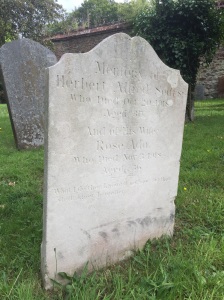 The grave of Herbert Sears and his wife, Rose

Others remembered on family graves include Frederick Harold Bourne who fought with the Australian Imperial Force, brothers Percy and Albert Hayward and Jack Baldwin. 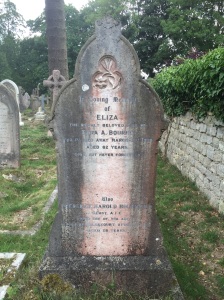 Frederick Harold Bourne remembered on the grave of his parents

All of these men are remembered on the town war memorial and so I have recently been researching the graves of those men who are buried in the churchyard but not named at The Vine.

Frank Powell is one of these men. His grave is marked by the traditional headstone of the Commonwealth War Graves Commission but, unusually, is surrounded by a family grave that names his wife, Edith Amy Blanche Bees (1882 – 1969) and daughter Winifred Frances Gwendoline Powell (1909 – 1984). A little research revealed that Frank, a Sergeant Major in the Army Service Corps, had died suddenly in 1916. The Sevenoaks Chronicle recorded that

Shortly after mid-day, the deceased walked up through the town and spoke to Mr Fulbrook about a game of billiards that was played the previous evening. He then appeared to be in his usual health and was in good spirits. Two or three minutes later however, he fell down in front of the side door of the Dorset Arms Hotel. A member of the R.A.M.C and several others rendered assistance but before medical aid could be summoned the unfortunate man had passed away.

Deceased who was about 38 years of age, was a popular non-commissioned officer, both among the corps and the townspeople to many of whom he had become known during his stay in Sevenoaks. A native of Gillingham, he had seen 18 years service in the army.

The funeral took place with full military honours …when the remains were interred in St Nicholas cemetery. The coffin, covered with the Union Jack, was conveyed to the church on a gun-carriage, supplied by a Home Counties Battery whilst the Middlesex Regiment provided a firing party and trumpeter who sounded the Last Post. The band of the Middlesex Regiment led the solemn procession which included a very large number of deceased’s friends from the various units stationed in the town. 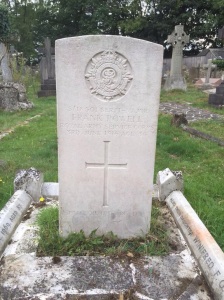 Frank appears to have been born in 1874 but lied when he enlisted in 1901, giving his age as twenty, meaning that his grave shows his age as thirty six and not forty two. Frank’s only daughter doesn’t appear to have had children who could shed further light on the story and I wonder how unusal this grave is? I’m aware of some CWGC graves where the names of other family members have been added but have not seen any others like this.

Others buried in the churchyard include Second Lieutenant Charles Nesfield Andrewes. Born in 1876 in Horsham, Sussex, Charles Andrewes attended Trinity College, Cambridge and joined the South Devon Yeomanry in 1902. He served during the war as a Lieutenant in the Labour Corps and died of influenza after the Armistice on 29 November 1918.

Perhaps the most famous combatant to be buried in the churchyard is Captain Bernard Paul Gascoigne Beanlands, a Canadian flying ace credited with several victories.

Beanlands was born in Canada in September 1897 to Canon A.J. Beanlands and his wife, Laura, later of Wickhurst Manor, Sevenoaks Weald. He was educated at Oundle before attending Sandhurst and joined the Hampshire Regiment in December 1914. Eventually serving as a Lieutenant and serving seven months in the trenches, he was transferred to 70 Squadron of the Royal Flying Corp in May 1916 (achieving most of his kills with 24 Squadron). His first victory came in that September when he killed German aces Hans Rosencrantz and Wilhelm Fahlbusch. Later that year he was promoted to Flight Commander, serving as temporary captain. He scored eight more victories and was awarded the Military Cross (gazetted 25 April 1915) according to the citation

The Sevenoaks Chronicle reported in 1917 that he had been suffered gunshot wounds in both thighs, having previously been wounded once before. The paper noted

He is at present at Brighton and has been out on parade on a spinal chair. It will be a long, slow cure. Captain Beanlands has the honour of being known as a very clever Airman and has been responsible for the fall of numerous enemy aircraft.

Paul Beanlands recovered and was wounded again three days after his final victory in March 1918 and did not return to combat. However, he survived the war only to die in a flying accident at RAF Northolt on 8 May 1919. He was buried next to his father in the churchyard at St Nicholas. 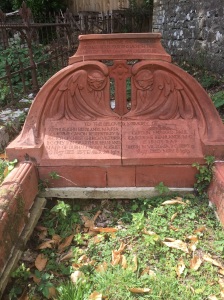 The grave of Paul Beanlands and his father, Canon Beanlands

With the passage of time some of these graves have fallen into disrepair while others are still legible and bear witness to the men who fought. As usual, I’d be very pleased to hear from anyone who has a connection to any of these men.