Earlier this year, I was pleased to hear from Tim Marshall. Tim is a Great Nephew of George Marshall, one of the fallen of Sevenoaks of the First World War and one of several of the men who had lived on Buckhurst Avenue in the centre of the town. George Marshall had emigrated to Australia in 1912 with his friend Arnold Jarvis. Both had previously been pupils at the Lady Boswell’s school and sailed for a new life together on board the Ionie. Another Sevenoaks ANZAC, Kenrid Davey, was also on board and I wonder if they were known to each other. George Marshall died from wounds sustained, according to a report in the Sevenoaks Chronicle of 27 July 1917 by

…the accidental bursting of a bomb. Deceased, who left Sevenoaks for Australia about five years ago, joined the Imperial Force last year. In April last, he was married at Kensington and afterwards spent some days in Sevenoaks. Private Marshall is a brother-in-law of Mrs Marshall, whose husband is with the colours in Mesopotamia. Another brother of Private Marshall’s is serving in France whilst Mrs Marshall has seven brothers in the army, the eldest of whom has been a prisoner of war in Germany since the battle of Mons, in which he was wounded.

Tim Marshall’s grandfather, Harry, was one of the brothers mentioned, serving with the Army Service Corps in Mesopotamia. Harry, who before the war had worked for E.J. Payne, a grocer (now the site of the Sun Do restaurant), was himself mentioned in the Chronicle when he was hospitalised as a result of an accident, later making a full recovery. Harry served as a Verger at St Nicholas church and died in 1937 aged 58. 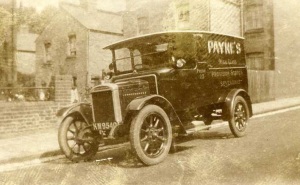 The other brother mentioned in George’s obituary, John, known as Jack, was 29 and working as a gardener at the Royal Crown Hotel in Sevenoaks, when he enlisted in December 1915. He served with the Royal West Kents

Jack was wounded in early 1918 and invalided home to England to recover before returning to action. Later in the August, the Sevenoaks Chronicle carried a news report detailing how Jack had again been wounded. As the paper noted,

This is the second time that he has been wounded and but for a remarkable circumstance his wound on this occasion would undoubtedly have been fatal. It appears that in returning to France, after recovering from his previous wound, he purchased a watch at Folkestone, which he was wearing when struck for a second time.The bullet passed clean through the watch, which broke its force, before it entered his body, and so saved his life. It is also a notable coincidence that the second wound was exactly on the same spot as the first. 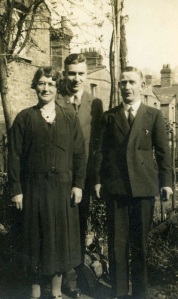 Harry in later life with his wife, Jane and son, Edward, who served in World War II

Both Harry and Jack survived the war but, as in so many families, it seems as if their war service and the story of Jack’s life being saved by his pocket watch, was not mentioned in subsequent years, only being rediscovered in recent research. The Marshall brothers grew up on Buckhurst Avenue, as did many other local men who fought in the war, including the Hayward and Hodgson families, who I’ll be writing about in my next post.

One thought on “Jack Marshall – saved by his pocket watch”