By 1914, Henry William Forster had been the MP for Sevenoaks for twenty two years, holding the seat from 1892. A Deputy Lieutenant of Kent he went on to serve as Financial Secretary to the War Office from 1915. Forster had married his wife, Rachel, daughter of the 1st Lord Montagu of Beaulieu, in 1890 and the couple had four children, John, Alfred Henry, Rachel and Emily.

Henry Forster later became MP for Bromley in 1918 and was ennobled in 1920 becoming 1st Baron Forster of Lepe in Southampton. From 1920 until 1925 he  served as Governor General of Australia before returning home to live at Exbury House until his death in 1936 aged sixty nine.

Forster’s eldest son, John, was born on 13th May 1893 and was gazetted as a Second Lieutenant in the King’s Royal Rifles on 3rd September 1913.

In the early days of the war the fact that the son of the local Member of Parliament was already at the front was mentioned several times at public recruitment meetings in Sevenoaks, to demonstrate that the sons of the politicians and the gentry were already ‘doing their bit’.

John Forster was killed in the early hours of 14th September 1914 during the First Battle of the Aisne. His battalion had been ordered to advance to the plateau of Troyon and dig in.  They went forward in bad weather and when they reached the crest, were unable to continue further and found themselves pinned down by enemy fire coming from the occupied sugar factory at the crossroads above Troyon.

John’s death was reported in the Sevenoaks Chronicle, along with a letter that had been written to his parents

“I ought to have written before about your dear brave Jack, but I was shot through the head the same day and it has been impossible. He died like the gallant English gentleman that he was, leading his men at a critical time when men wanted leading. He was shot right through the head and never recovered. He was my best and brightest officer under all the most trying circumstances and his men all adored him – as of course we all did”.

“The circumstances were as follows:

Our Battalion was ordered out in advance of the Division to occupy some high ground and hold it while the Division passed. We were just getting up to the top at 4 a.m., when, at a point where the space between us and the top was almost perpendicular, we suddenly found ourselves being fired at in the dark by hundreds of Germans, who were firing right down on us as if we were in a rat-pit, so to speak. We had to force our way up to the top of the hill, and when we arrived there we found ourselves confronted by a strong force of Germans, entrenched with machine guns in position, and only 200 yards off. We remained there all day under a heavy shell and rifle fire”.

“It was a terrible day for our Battalion. By mid-day there were only six Company officers left. We lost 15 officers out of 24 and 283 men. These heavy losses were mostly caused by those dirty Germans holding up their hands in token of surrender and then opening fire on us when we got within 20 yards of their trenches. I am so very sorry about your son, He was a first-class officer and a great favourite with his brother officers as well as his N.C.O’s and men”

John’s brother, Alfred Henry was born on 7th February, 1898 and educated at Winchester College before attending the Royal Military College, Sandhurst. He was commissioned in the 2nd Dragoons Guards (Royal Scots Greys) in July 1916. 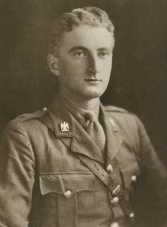 Alfred was sent to France the following February and was promoted to Lieutenant on 19th January, 1918. On 17th October 1918 he was seriously wounded near Le Cateau and transferred to the Gerstley-Hoare Hospital for Officers at 53 Cadogan Square, Belgravia, London, where he spent five months before dying of his wounds on 10th March 1919.

While at the hospital, Alfred became friends with fellow patient, the sculptor Cecil Thomas (1885-1976). After Alfred’s death, Lord and Lady Forster commissioned Thomas to design the remarkable memorial to John and his brother, which is in the church of St Katherine at Exbury in the New Forest. The bronze figure was exhibited at the Royal Academy in 1924 and a model is held by the Victoria and Albert Museum. 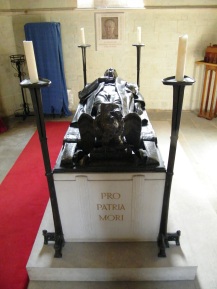 Memorial to the Forster brothers at St Katherine’s, Exbury

All images ©Come Step Back in Time

The memorial, which displays a recumbent figure of Alfred, is inscribed

To the glory of god and in loving memory of their two sons John and Alfred who gave their lives for king and country in the Great War 1914 -1918 this monument is erected by Lord and Lady Forster of Lepe.

There is also a memorial plaque to John Forster at the church in Exbury.

All images ©Come Step Back in Time

The Forster family had previously lived at Southend Hall in Lewisham (now demolished) and Lord Forster donated the land for Forster Memorial Park near Catford in memory of his sons and the park was opened by his daughter, Dorothy, in 1922.

The brothers are also remembered at their schools and in the parliamentary books of remembrance at Westminster.