Our new book, Sevenoaks – The Great War and its Legacy is now available. The book is on sale at Sevenoaks Bookshop, at other stockists, and direct from us at books@sevenoaksww1.org for £14.99 plus p&p. 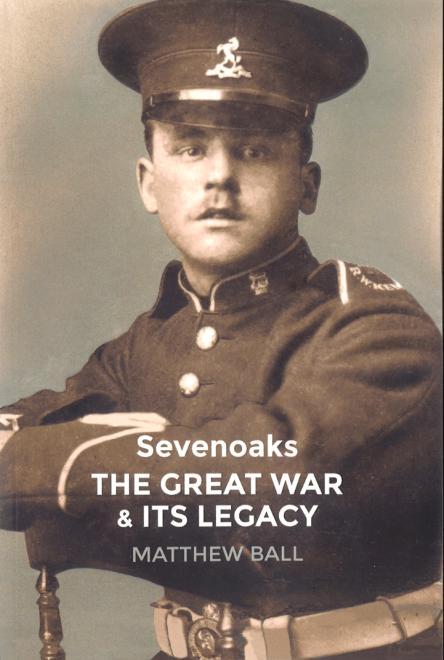 The book looks at all aspects of the war in the town, from the men who went away to fight, to the arrival of Belgian refugees and life on the Home Front. Author, Matthew Ball, takes the story of the men who survived up to the 1960s during the 50th anniversary and records how the town has been marking the centenary.

Matthew will be signing copies from 14.30 on Saturday 10th November and will also be at Café on the Vine after the Remembrance Sunday Services (details below).

To mark the publication of the book, Sevenoaks WW1 is giving guided tours of Greatness Cemetery on Saturday 3rd and 10th of November starting at the chapel at 10.30. Tours last for approximately 1 hour and take in a range of local residents who were involved in the conflict. We visit the grave of a Crimean veteran who was involved in recruitment drives and that of Percy John Brooks, a victim of an early Zeppelin raid. 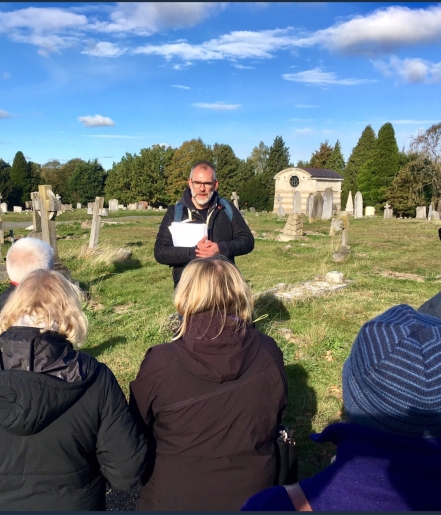 The Stag Theatre has it’s own Remembrance season, including a play based on the experiences of Belgian refugees in Sevenoaks, researched by Sevenoaks WW1.

Performances are on 1st and 2nd November with a programme of talks and Q&A from 6.30 before the play begins. 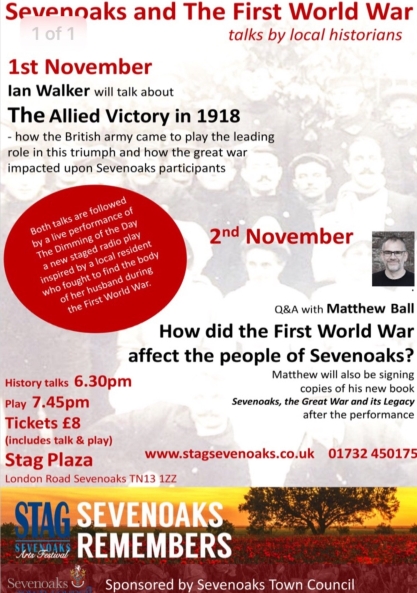 Our twitter feed @7oaksww1 is regularly updated with more information but if you have any queries then please email matt@sevenoaksww1.org 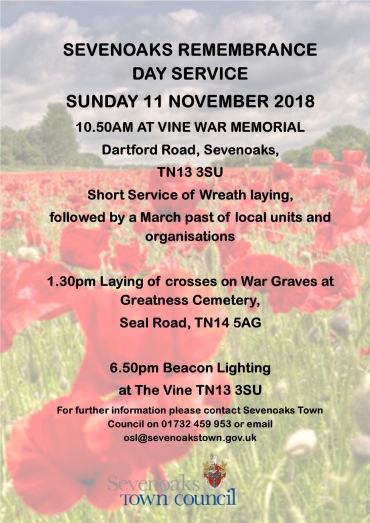 Half a century ago, the fiftieth anniversary of the First World War prompted many veterans to remember their wartime service or to recall life at home during the conflict. Fortunately, some of these memories have been preserved as the Sevenoaks Chronicle reported the thoughts of these veterans as they either returned to Sevenoaks where they had once been garrisoned, or looked back to their boyhoods to a time when thousands of soldiers were stationed in the town, along with many wounded at the local VAD hospitals, as well as refugees from Belgium.

Fifty years after he had been stationed in Sevenoaks as a Private with 5th Battalion King’s Own Royal Lancashire Regiment, between November 1914 and February 1914, Harry Burrow returned to Sevenoaks. Harry was interviewed by the Chronicle during his visit and said

Sevenoaks was utterly familiar. I booked into the famous Royal Oak Hotel and it had many of it 1914 qualities. Sevenoaks was still full of riches and Granville Road was no exception. At the junction with Eardley Road, recognisable to me at once, were the two detached houses commandeered for our battalion HQ and Quarter-Master stores. Down at Tubs Hill, to my delight, I found the Elite. This was the local flea pit, a small music hall.

On Thursday nights the local talent tried out its stuff. Entrance was 2d for men in uniform. The stage was still there but the laughing legion of the 5th King’s Own had long since dissolved. On the other side of Tubs Hill station I found Holyoake Terrace and to reach it I drove over the main bridge where we had assembled on the bleak, historic, wet and cold St Valentine’s Day 1915 to embark for France. At Knole Park, all I could do was peer in the gates and see again in flashback our battalion in trench digging practice. Little did I know that within a few months this was to become a stern reality.

In 1914 the main shopping street was full of dignified horse and carriage trade and urbanity. Now much of that personality was lost. The Shambles area retained its antiquity and I was delighted to find the pavilion band stand on the Vine had not changed. I was swept back to a Sunday afternoon where we sat expectantly in the gardens, a great concourse of khaki figures, when a lady mounted the platform. She wore a flimsy hat and, to our delight, Lancastrian red roses on her bosom. In a moment she slipped into the rousing, emotionally, recruiting song that was sweeping the country. A thousand cheers, a thousand pair of clapping hands, a thousand hearts wishing she would do the kissing now. And then her encore, ‘you made me love you, I didn’t want to do it’. She was Mrs Reubens, someone said, the wife of Paul Reubens, the composer.

John Edward Smith was featured in the Sevenoaks Chronicle in 1966 in his workshop at the foot of Wickenden Road. A local resident and a gunmaker during the war, he was also best man at the wedding of the parents of future Prime Minister, Edward Heath. 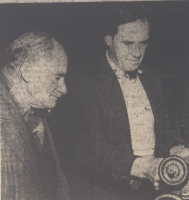 John Smith with son, Leslie, in his workshop

Smith worked at Woolwich Arsenal during the war, where he was in charge of a giant steam hammer, which could be adjusted so closely that it would come down on a watch placed on the anvil without breaking the glass. “I used to do it regularly. When the hammer fell, you couldn’t pull the watch out, but the glass was still intact”.

Smith bored 100ft long gun barrels for naval vessels. When the Zeppelin raids came he would climb into a barrel and wait until the bombing as over. “There was never a safer air raid shelter”. He recalled seeing Zeppelins brought down at Potters Bar, Cuffley and Billericay and was closeby when the Silvertown ammunition dump blew up.

Frederick Charles Zealey returned to Sevenoaks from further afield, having emigrated to Australia in 1920. Zealey was born in 1904 at the Limes, St John’s where his father was a well known builder. He attended Cobden Road School before graduating to the school at nearby Bayham Road. Although too young to enlist himself, his brother, Arthur William Zealey (1894 – 1960) served as a corporal with the West Kent Yeomanry and was stationed in India. 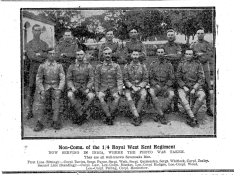 Frederick recalled his memories of wartime Sevenoaks, writing for the Sevenoaks Chronicle that

I can remember when the firm of Quinnells, the removalists and contractors had a traction engine which pulled vans and wagons through the town, in 1911 – the Coronation year.

This engine and three open wagons, all covered in bunting took all the school children up through the town to Knole Castle (sic) where we had a picnic on the green in front of the castle.

I also remember Mr H Hill, the baker at St John’s, with his bread cart and blind white pony – also Mr Kipps, the butcher, with his butcher’s carts and his piebald pony Tetratch It used to pull a governess cart or trap around the town, and in it would be Mr and Mrs Kipps, their daughter, and son George, who was killed in World War One.

I have a photo of the men of the Royal West Kent Regiment on the Tubs Hill Station, waiting for the train to France on about August 4, 1914. Sevenoaks in those days became a garrison town for troops, and many were in billets and empty houses. Regiments such as the Loyal North Lancashires, Yorkshires, and King’s Own were stationed in Sevenoaks. I attended the unveiling of the war memorial at the Vine after the war. 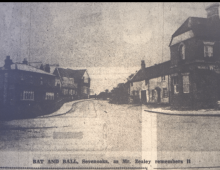 Bat & Ball from Zealey’s own photographs

The old cinema was opened before World War One and the prices listed in the Sevenoaks Courier were listed as twopence a seat for children and nice plush seats for 6d and 9d and 1s for the gallery. There used to be a pianist to play and sometimes a violinist. You could hear us roar the house down at Charlie Chaplin, Steve Hart, Broncho Bill, John Bunny, and Flo Finch, and other old time film actors.

We used to play in the old Oast House or hop kiln opposite the cinema, long since pulled down.

I’d be very pleased to hear from anyone related to these men, especially if any photographs from the time are still in their possession.