George Henry Heslop is the fourth of the five Sevenoaks men who died on (or whose death was officially recorded as having occurred) on the first day of the Battle of the Somme.

He was the son of the Headmaster of Sevenoaks School, also George and his wife, Gertrude. Born in Sandbach, Cheshire in April 1895, the 1901 census shows the family living at the School, with George living with his three sisters, Margaret, Evelyn and Faith.

George had prepatory lessons at his father’s school until he was sent to Lancing College, where he was in Olds House from September 1910 to July 1914. He was a member of the Officer Training Corps where he achieved Certificate A. He was in the Cricket XI from 1911 to 1914 being Captain in 1913 and 1914.

He topped the batting average in all his summer terms, scoring 981 runs in his time at Lancing, finishing the 1914 season with an average of 89.

He also bowled, taking nine wickets for fourteen runs against Eastbourne College in 1913 and finishing the years 1913 and 1914 as the school’s highest wicket taker also being second in the bowling averages for both years. Consequently, he was described by Wisden as being “the most promising young all rounder who had yet to appear in a first class match”.

He won a place at Trinity College Cambridge in 1914 but did not take it, due to the outbreak of war, choosing to join the army instead. On the 11th of September 1914 he enlisted at 24 St James Street, London as Private 433 in the Public Schools Battalion of the Middlesex Regiment.

He was commissioned as a 2nd Lieutenant in the 16th Battalion on the 29th of September 1914, was promoted to Lieutenant on the 25th of January 1915 and to Captain on the 17th of May 1915.He attended Staff College for a month and qualified as a first class instructor of musketry.

By November 1915 he was at the front where he saw action at the Hohenzollern Redoubt.

On the 26th of January 1916 the Germans attacked across the old Loos battlefield and the 16th Middlesex were called upon to re-enter the front line (they had been resting) to support a battalion of the King’s Royal Rifle Corps. On the morning of the 28th of January the Company Commander of B Company, Major Way, was moving along the front line trench with Captain Sholto-Douglas and the company runner. Shortly behind them was George Heslop leading a group of men of roughly platoon strength. Suddenly a heavy barrage fell on the group killing the two officers and wounding Heslop and a number of others.

He returned to his unit shortly afterwards when he spent much time involved in the reorganisation of his battalion after the losses they had suffered during the fighting at Loos.

He was put forward for promotion to Major but this was turned down on the grounds of his age and of insufficient experience. He attended a number of courses in bombing and machine gun practice and was appointed to the staff at his Headquarters.

He took part in a number of raids in the three weeks before the opening of the British offensive on the Somme on the 1st of July 1916. His Chaplain wrote of his attendance at Holy Eucharist shortly before the attack.

In the early hours of the 1st of July 1916 the 16th Battalion Middlesex Regiment moved up from where they had been resting at Auchonvillers to assembly positions from where they would take their part in the opening attack. They were to join the rest of their Brigade in assaulting the German positions from the village of Beaumont Hamel to a position 100 yards to the west of the German trenches at the Hawthorn Redoubt. The Middlesex were to be in support of the 1st Battalion Lancashire Fusiliers and the attack would be immediately preceded by the explosion of a large mine under the Hawthorn Redoubt which would be the signal for the British advance to begin. D Company, led by Captain George Heslop, would be on the left of the battalion’s advance and would take a Stokes Mortar with them.

They reached their assembly positions by 3am and by 6.25am the British artillery had become intense as zero hour approached. At 7.20am the mine under the Hawthorn Ridge exploded and at 7.30am the British advance began. The Middlesex followed at 7.55am, D Company quickly formed up into ranks, described as “parade ground straight”, and moved forward.

As they crossed no man’s land their ranks were swept by intense machine gun fire and men began to fall immediately. German artillery also joined the retaliation and began falling on the front line and support trenches adding to the enormous casualties.
The attack quickly faded under the weight of fire with the few survivors going to ground to seek cover from the relentless fire. But most had died in the two hundred yards between the British front line and the edge of the Hawthorn crater, including George Heslop.

One of his men wrote that he advanced that day “not minding the shells and bullets, but just leading us on as if nothing was happening“.

His Colonel wrote of the love felt for him in the regiment, of his rapid promotion and that of the 24 officer casualties on the 1st of July and that “no one’s death would be more deeply felt”.

In order to establish what had happened to George Heslop a number of statements were taken from members of his battalion who were present that day.

On the 25th of October 1916 a statement was taken from Sergeant 1217 H.G. Valentine while he was in No. 11 General Hospital at Etaples. Valentine had been with the battalion signalling section that day

“I started out with the Colonel, but got separated from him and found myself with Captain Heslop who was in charge of the Pioneers. By his order, we lay down by the wire and advanced about 100 yards. Then we saw him drop down. At first we thought he was giving the signal to halt, but as he lay still, we concluded that he was dead and continued on, leaving him there. Later we retired and reported to the Colonel. Search parties were sent out, but could find no trace of him”.

A statement from Sergeant 1443 A. Butler, D Company was taken while he was at 5 Southern General Hospital, Faucett Road, Portsmouth

“Informant states that on 1st July or July 2nd at Beaumont Hill Capt. Heslop was seen lying dead just outside our parapet by L/Cpl Sephin, who told informant that he had examined Capt Heslop and had found him to be dead. Informant was lying out wounded for three days in this part of the line and said that the Germans were picking up and taking in many of our wounded, but as he was told that Capt. Heslop was lying nearer to our parapet than that of the Germans he did not think it likely that they had taken him in”.

The date of death was accepted for official purposes as having occurred in action on the 1st of July 1916.

Heslop’s family received a telegram informing them of his death on 6th July. His devastated father wrote to a in a letter to a parent

“My boy was killed on 1st July in the first ten minutes of the great push. There is nothing to say. He had a duty and it was done”. 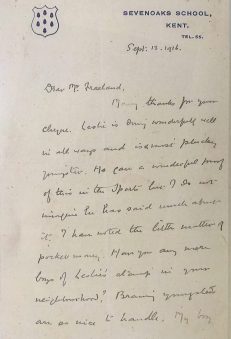 Later in the war, in November 1917, Heslop wrote to another parent

“The war is very cruel. By our post yesterday I heard of the deaths of two more old boys. We schoolmasters have suffered. For though our boys are not of our blood they become very dear to us and something more than friends”. 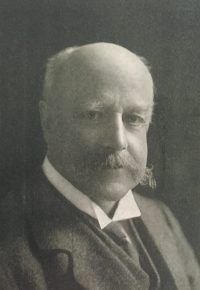 Over three hundred Old Boys of Sevenoaks School fought during the war with around forty being killed.

George Heslop’s body  was  recovered, identified and buried in 1917 and in another letter his father wrote

“I have just had a letter from the Front giving me a full account of the finding and burial of my boy”.

Captain George Heslop is buried at Hawthorn Ridge Cemetery and commemorated on the war memorial in the chapel at Trinity College Cambridge and with a memorial plaque inside the church at St Nicholas, Sevenoaks. 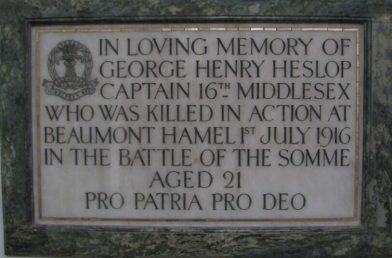 “In memory of Captain G.H. Heslop, Middlesex Regiment, who fell in action last July, and who was very prominent in athletics at Lancing College, an anonymous gift has been provided, by means of which a cricket bat will be presented annually for the best individual performance in the Brighton College match”.

My thanks to John Hamblin on behalf of Lancing College and Mrs Sally Robbins, archivist at Sevenoaks School, for their collaboration and permission to use some material published elsewhere. 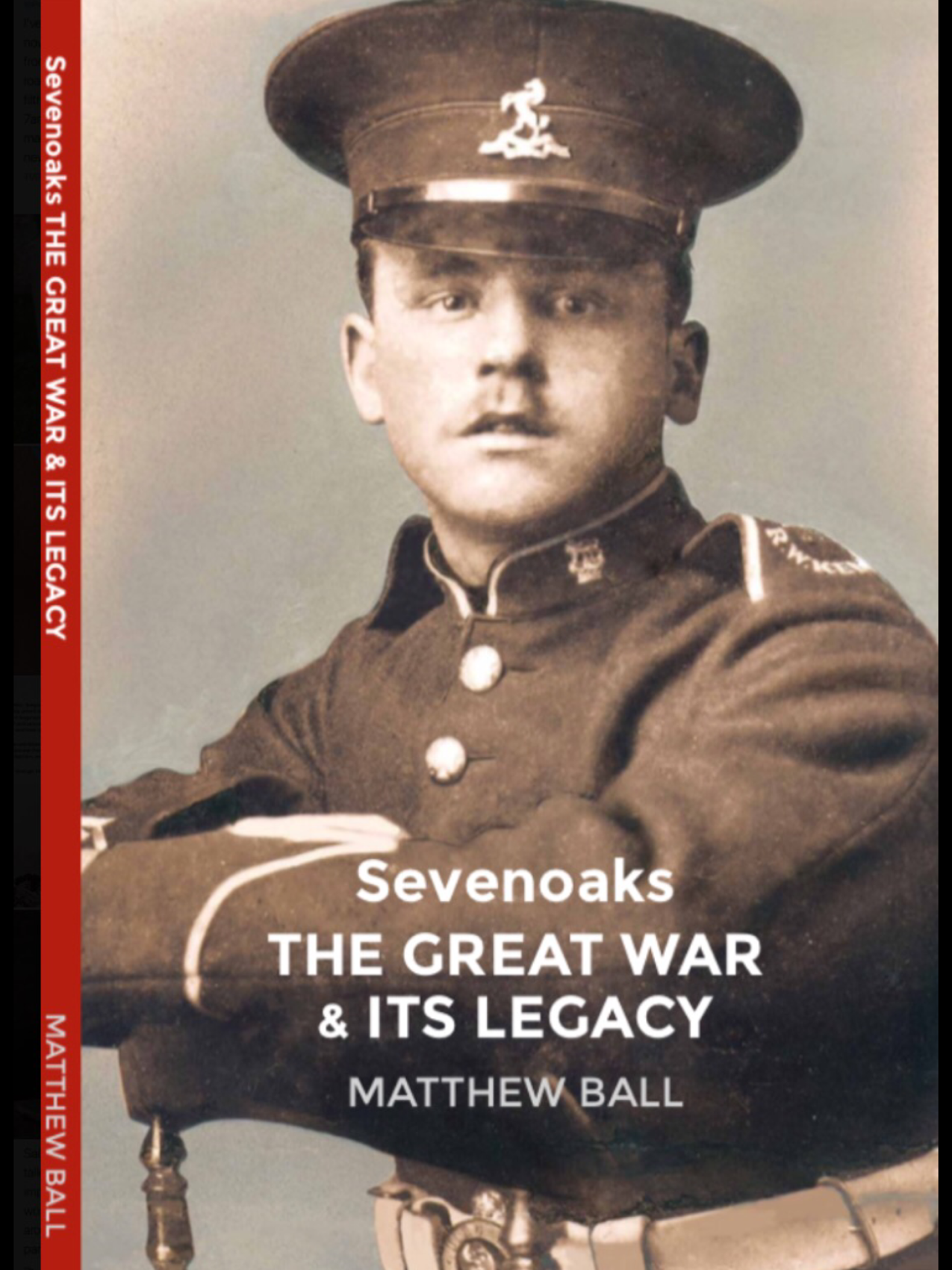 Buy our latest book that tells the story of the men and women of Sevenoaks during the Great War,