Geoffrey Harrison is the fifth and last of the Sevenoaks men that were killed on the first day of the Battle of the Somme. His great nephew, Sir Michael Harrison, still lives in Sevenoaks and has written this account of the life of his great uncle, which is included in my book on the war memorial.

Geoffrey Harrison, my paternal great uncle, was born on 8th April 1896. His father was Bernard Bowles Harrison and his mother was Elizabeth Anne Harrison (nee Franks). In the 1901 Census, Bernard Bowles Harrison was described as a Master Printer. At the time of that Census, the family was living at ‘Hurstdale’ in Granville Road, Sevenoaks, a house which was built sometime between 1890 and 1896 and which is still standing today. The family at that time included Geoffrey’s older brother Bernard Guy (my grandfather, who later became Sir Guy Harrison), who was fifteen at the time, and his two sisters Winifrid Madge, then aged thirteen, and Elsie, then aged twelve. Geoffrey was the youngest, aged four. Guy Harrison married Cicely Vicat, sister of Horatio John Vicat and Frederick Holland Vicat, who are also remembered on the Sevenoaks War Memorial.

Geoffrey was educated initially by Miss Webb in Granville Road, Sevenoaks. He then went to a prep school called Beechmont in Sevenoaks where he was captain of the school. After that, he went to Rugby School in 1910. He left Rugby School in 1914 to go to University College, Oxford but shortly thereafter, on the outbreak of war, he enlisted in the Public Schools Brigade. Documents at that time record that he was 6’ 2 inches tall and weighed 160 lbs. He was described as having a fair complexion, blue eyes and blond hair.

In December 1914, he obtained a Commission in the 12th Battalion of the Hampshire Regiment, transferring later to the 13th Battalion. On 21st December 1915, he was transferred to the Machine Gun Corps (Infantry), and in April 1916 he left for the Front. 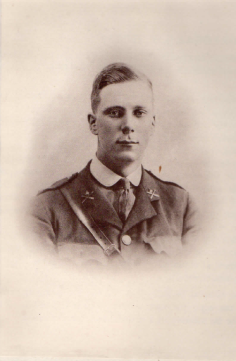 He was killed only a few months later on 1st July 1916 on the first day of the battle of the Somme (there is a telegram from the Army Council to his father dated 9th July informing him that Geoffrey was killed on 2nd July but that was corrected in a later document dated stating that there had been confusion between officers of the same name and confirming that Geoffrey had been killed on 1st July 1916).

The circumstances of his death were that he was leading his Section in ‘No Man’s Land’ at Contalmaison when he received a wound in the thigh. He gave instructions to his NCO to push on, when a shell burst and killed him. He was aged twenty.

‘I have been out of action ever since the first day of the attack, and only had my first news of the Coy. late last night, and with it the terrible news about Geoff. As you know we have been chums ever since we joined the Corps. and for the last six months have done everything together. Since we have been in France, whenever the officers had to be paired off for billets, etc, or an occasional day free, we two were together. This is a fairly stiff test of friendship, yet I can honestly say that no man could ever want a better pal, and throughout that close relationship I have never known him to say or do anything unworthy of the true Gentleman he always was.

Off parade and in Mess his classical allusions and quaint phrases kept us in constant good humour up to the last. He was everybody’s pal. On parade I can only say that his men loved him.

We said Good-bye to each other on the evening before the attack commenced at about 6.30 when he was in the best of spirits. As our sections were on opposite flanks I had no chance of seeing him during the action, and before we’d been moving a quarter of an hour I had a bullet through both lungs. I shall do my best to learn more details from those who were with him up to the last, if I get the opportunity – but I know there is only one way in which he could have gone out, and that is as a gallant officer and gentleman.

As I am sure you know, my sympathies go out in full to you and Mr. Harrison, and I feel much more than I can express.

If I succeed in learning anything that I think would interest you at all, I will let you know, or, when I am well enough, may I come and see you?

Until then, I remain,

Geoffrey is buried in Ovillers Military Cemetery in the locality of the Somme.

There is a splendid plaque inside St. Nicholas’ Church, Sevenoaks, in memory of Geoffrey Harrison. It refers to him being killed in action near Fricourt in the Battle of the Somme on 1st July 1916, aged 20. ‘He died the noblest death a man may die Fighting for God and Right and Liberty’.